Ever gotten a notification that a new animation, collage, story, etc. has been created for you, then forgotten to save it (or accidentally swiped away the card)? Creations like these stay in your account (not counting against your storage quota, by the way), and you can view them on the Web by visiting photos.google.com/unsaved.

iOS, Android, and Web have received some nice tweaks. All platforms now show “Rediscover this day cards.” In addition:

I’m absolutely charmed by this loving four-minute peek inside “24 Hours of Lemons,” a sort of Burning Man for gearheads.

Every day now—literally every day—I look forward to my Assistant showing me memories from this date in the past. I find myself sharing these with lots of friends & family with whom I otherwise wouldn’t connect. Here’s how it works:

Google Photos will now ask whether you’d like to see memories past days. If you say yes, you’ll start receiving Assistant cards containing collages like this one, and tapping them will take you to galleries (example) that you can share with just a tap or two. 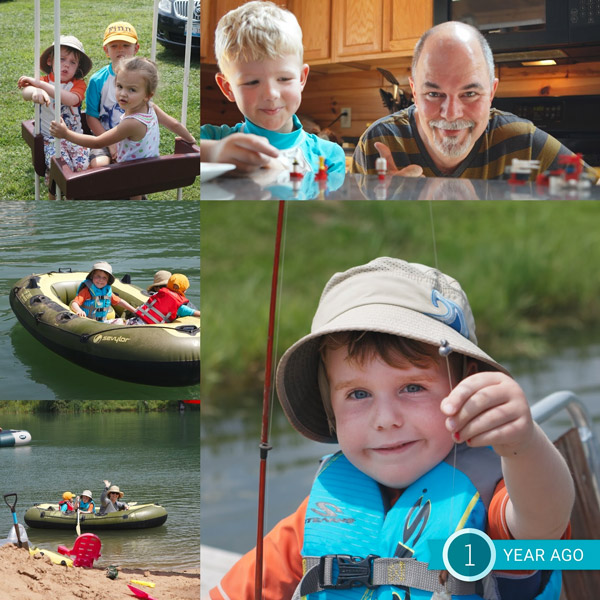 It’s kind of like Timehop and Facebook’s memories — but not really. It won’t bother you daily unless you had a worthwhile group of photos to show you. […]

[PM Chris Perry says] “Visual quality of photos is taken into account. No screenshots. We’ll look at photos taken over a longer timespan, something that was more of an ‘event.’ Something that’s going to emotionally resonate. We look at the presence of landmarks. Those get promoted to collages. People are a strong signal that we’ll use to help remind you.”

I can’t tell you just how much I’ve been enjoying this feature as we’ve been testing it, and I hope you enjoy it, too. As always, feedback is most welcome.

Google Photos wanted to see how fast New Yorkers could find their photos, and the results were delicious. Now we’re bringing the show on the road. Check us out in Los Angeles, where we’ll be dishing up free Coolhaus ice cream 8/21-8/22. New treats await in Portland (8/28 – 8/29) and Austin (9/4 – 9/5). Don’t forget to bring your phone!

Here’s the product forum, where you can interact with fellow users & members of the team, and here’s the help center. (Told you it was a quick tip. 🙂 )

For other Google Photos tips, check out that category on this blog.

Modulo lack of optical zoom, I’ve had more than enough resolution in my iPhone for years. What I want there & in my SLR is more dynamic range. Maybe new tech like this can help deliver it:

“Hmm, what would French intellectuals devise to comment on ‘self-design and the production of sincerity?’” you might just have been asking yourself (or, let’s hope, not). If so, rejoice in knowing that Gregory Chatonsky is on the case:

[He’s] developed a program that pulls tagged Instagram photos of Kim K in real time, and filters them through a software program he made using Unity3d.

The software automatically navigates a generative 3D skin model, created from more than 51,000 pictures of the star. The project looks at the same subject, Kim Kardashian, but is constantly using a different image, creating what the artist describes as a “fascinating difference in the repetition.” […]

“It is simply an extended skin, everything is on the surface. There is nothing to look behind.”

As I mentioned a few weeks back, I’ve been seeking ways to live a more meaningful, impactful life. This doesn’t mean I have to run away to the desert to wear sackcloth & ashes—at least my family hopes not!—but it does mean pushing myself harder, and with more discipline, to ask good questions & to act on the answers.

Before I took my sabbatical to Guatemala, I reached out to Jeffrey Veen, who had just sold Typekit to Adobe. Over lunch he explained that after he’d left his previous gig, he undertook what he called “100 lunches,” meeting up with as many smart, interesting, creative people as he could. In the process he gradually formed the idea & knowledge needed to launch Typekit. In a similar vein, I’ve been talking to many of the bright, thoughtful people I’ve been blessed with meeting over the years, learning more about their journeys & perspectives.

My friend Deepa spent 10 years in product management at Macromedia/Adobe in SF, then totally reworked her life: she joined Charity Water, moved to NYC, learned a ton, and recently joined the Clinton presidential campaign. She advised me to think in lean-startup terms, prototyping changes to my life, seeing what holds promise, and iterating to learn more.

Deepa also mentioned The Quarter-Life Breakthrough. I don’t yet know much about the book, but I did enjoy the TED talk below from Adam “Smiley” Poswolsky, in which he talks about giving up what you’re supposed to value to pursue what brings you real satisfaction. A few key points:

Remembering that “The journey is the reward,”
J.

Filmmaker Ian Wood roved all over LA with his remotely piloted craft, capturing lovely, tranquil angles on the grit & grime that I associate with that metropolis.

If that spins your rotor, check out his installment from last year (focusing just on downtown):