We love VR. We love taking pictures. So we figured, why not try smashing the two together?

Sprayscape is a quick hack using the phone’s gyroscope to take pictures on the inside of a 360-degree sphere. Just point your phone and tap the screen to spray faces, places, or anything else onto your canvas. Like what you’ve captured? Share your creations via a link and your friends can jump into your scapes and have a look around using their phones or even Google Cardboard.

Nerdy details from the team:

Sprayscape is built in Unity with native Android support. Sprayscape maps the camera feed on a 360 degree sphere, using the Cardboard SDK to handle gyroscope data and the NatCam Unity plugin for precise camera control.

The GPU makes it all possible. On user tap or touch, the camera feed is rendered to a texture at a rate of 60 frames per second. That texture is then composited with any existing textures by a fragment shader on the GPU. That same shader also creates the scape you see in app, handling the projection from 2D camera to a 360 sphere.

When a user saves a scape, a flat panorama image is stored in the app data. When a user shares a scape, the three.js web viewer takes that flat image and wraps it to a sphere, making it navigable on mobile web by panning, tilting, and moving your device. 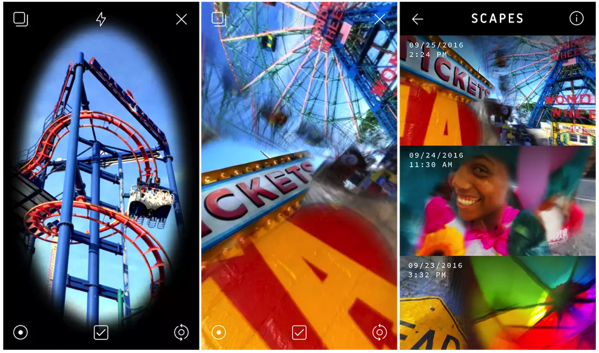