Margot is giving me the gift (intervention?) of horrible connectivity so that I can detox a bit from manic blogging, tweeting, etc. Therefore the blog & I will see you in the new year. Thanks for reading, and all the best to you & yours!

Good to know: according to PetaPixel, if you subscribe through Amazon instead of Adobe, you’ll get $30 to spend on Amazon:

Adobe CC’s Photography Program gives you access to the latest versions of both Photoshop CC and Lightroom for $10 a month. You’ll need to purchase the 12-month plan and pay $120 over a year for the $30 in Amazon credit.

This deal will only run through the end of 2014, and you’ll receive a promo code for $30 via email by February 14th, 2015 (there’s a delay in case you ask for a full refund within the first month).

What do you think of this thing?

It could be cool, but I find myself getting old & jaded. The Leap Motion sensor has yet to take off, and I’m reminded of Logitech’s NuLOOQ Navigator. It was announced some 9 years ago, drove Adobe tools in similar ways, and failed to find traction in the market (though it’s evidently been superseded by the SpacePilot Pro).

But hey, who knows?

No, not that one, but still fun. Hope you’re having a great holiday season! 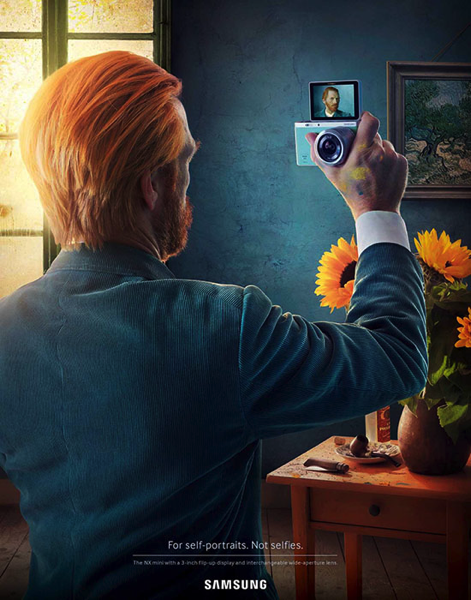 If you’ve been backing up photos & videos via Google+, check out g.co/YearInPhotos to see the Year in Photos we’ve made you. Here’s mine:

We’d love to hear your feedback about the movies. If you’re not yet using Auto Backup, here’s how to get started. And if for some reason you didn’t get a video but should have (i.e. you’ve uploaded plenty of shots this year), please shoot me a note (john dot nack at gmail) so we can try to get things sorted out. Thanks!

Check out this fascinating project:

Recently, the Smithsonian stopped by the White House to take a 3D portrait of President Obama, in what will be the highest resolution digital model of a head of state. Take a look at the process, and the 3D rendering created from this technology.

I’ve been a huge fan of Chopping Block and its cofounder Matthew Richmond for as long as I’ve been around the industry. (Actually, that’s not quite right: I used to kinda loathe them for being so, so much better at design than I was!) Therefore I’m thrilled that Matthew has signed on Director of Experience Design at Adobe. For years he’s been a thoughtful & generous sounding board for Photoshop, Illustrator, and many other apps, and I can’t wait to see him apply his creativity & fiendish attention to detail to Adobe’s offerings.

“Reasonable people can argue about the success of Google+ as a social network, but there can be little doubt that Google+ Photos has always been one of the most interesting and innovative aspects of the service.” —Frederic Lardinois

Congrats to my teammates on launching a great new feature. Now when you back up your videos using Google+, we’ll point out ones we can enhance, then provide an immediate side-by-side preview:

I’m excited to announce that now, with one click, you can enhance the lighting, color, stability, and (coming soon) speech in your videos. Here’s how it works:

In addition to the videos that Google+ suggests enhancing, you can choose to apply Auto Enhance to any videos you’d like:

After you enjoy this gorgeous, “Oh God, oh don’t do that!” thrill ride with master cyclist Danny MacAskill, go behind the scenes with director Stu Thompson to see how the film crew made things work.

Google has put together an interesting & nicely designed Year in Search site for 2014, giving some bottoms-up context to many of the year’s top news stories.

Interesting work from my old Adobe friends & their collaborators:

Our method automatically enforces consistent appearance of images that share content even without requiring any user input. When the user does make changes to selected images, these changes automatically propagate to other images in the collection, while still maintaining as much consistency as possible.

Check out a beautiful rendering courtesy of Selmesfilms

Aurora australis and aurora borealis (northern lights) as viewed from the International Space Station. Auroras are caused by charged particles entering the atmosphere from above causing ionisation and excitation of atmospheric constituents as they collide with the earth’s magnetic field.

I did this to show people that we filter and manipulate what we show on social media, and that we create an online world which reality can no longer meet. My goal was to prove how common and easy it is to distort reality. Everybody knows that pictures of models are manipulated. But we often overlook the fact that we manipulate reality also in our own lives.

PetaPixel has the story.

Here’s where she revealed the ruse to family & friends:

Speaking of Tinder-style card interfaces, Blippy is a rather delightful way to browse among animated GIFs, then add them to a custom iOS keyboard that you can use to punch up text messages, etc.

Now if only the world would devise a non-1980’s standard (y’know, one with more than 256 ill-compressed colors) and call it “GIF+” or something. The open-source WebP standard is less than half the size of a GIF, but it’s not yet widely supported. Maybe we just need to call it “GIF.”

What do you get when you cross Dribbble with the hot-or-not card-swiping interface popularized by Tinder? Why Tindddle, of course. It presents a neverending stream of designs that you can swipe or arrow left (“meh”) or right (“thumbs up”). I kinda love sitting here & discovering cool bits. 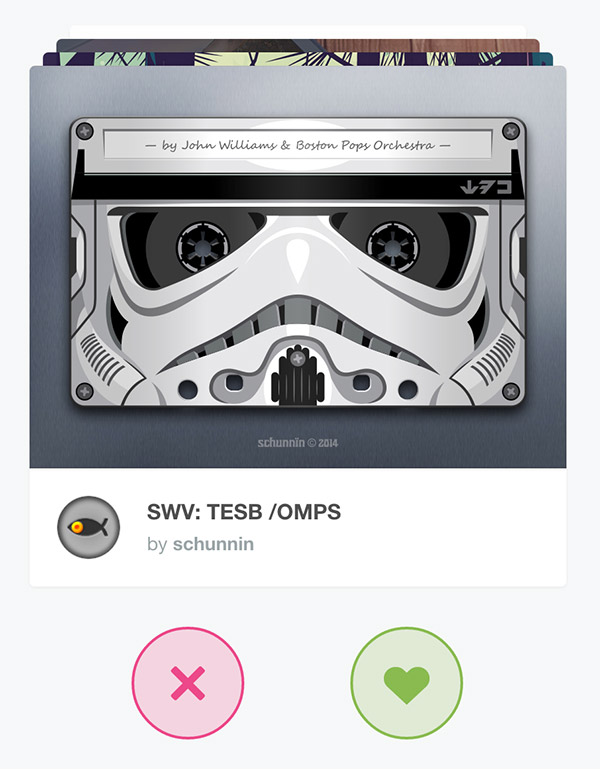 We’d love to hear your thoughts via Google User Experience. My team constantly chats with interesting folks from all walks of life (a Navy chief, a musician, and a homemaker among others this week) and would value your perspective.

A spiritual successor to the late Adobe Collage (mentioned yesterday), Curator could be interesting:

I’d first met Khoi while moderating a Layer Tennis match between him & Nicholas Felton, and at the time I was brainstorming about designers’ needs for tablet apps. “What about ‘Photoshop Volley,'” I asked Khoi, describing a totally non-destructive, cloud-backed design environment centered on playful exchange of ideas & artwork. It turns out he was working on something very similar, so we went off on separate paths. My team ended up building Photoshop Touch (a far more traditional app than I wanted to make), and Mixel launched as much more what I had in mind.

Sadly the app didn’t take off, but Khoi has continued to think about ways for tablets to help designers think & share better. He’s been working with Adobe on a new iPad app call LayUp, letting you make quick sketches that can evolve into styled renderings, and the response looks pretty enthusiastic. Check out some demos:

The sketch-to-shape tech reminds me of (and almost certainly was lifted from) Adobe’s innovative Adobe Proto (for sketching wireframes that turned into real code), the moodboarding aspects recall Adobe Collage—apps that were launched 3 years ago, then summarily executed some months later. Maybe LayUp’s export of native PSD, AI, and InDesign files, its Typekit integration, and its cool history feature will change the game this time.

What do you think? Will LayUp earn a place in your design process?

In the words of Liz Lemon reverting to childlike craving, “I want to go to there.”

[A[ll of the video you see was filmed with a DJI Phantom 2, GoPro Hero 4 Silver and Zenmuse H3-3D gimbal.

Perhaps the most impressive thing about these shots though is that they’ve not been graded, enhanced or stabilized (other than the gimbal of course) in any way. The GoPro was left on ‘auto everything” for every shot and it did an absolutely stunning job,” writes Lee.

Three years in the making, it’s handmade entirely out of paper, card, miniature lights and motors.

Sequel to the award-winning game Lume, Lumino City begins where that game left off. Begin by exploring the city, and using your ingenuity piece together all sorts of puzzling mechanisms to help the people who live in its unique world. Discover gardens in the sky, towers marooned high on an immense waterwheel, and houses dug precariously into cliffs.

To create the environment, a ten foot high model city was built by hand and by laser cutter, with each motor and light wired up individually, bringing the scenes to luminous life.

I’m delighted to see that Mischief, the infinitely scalable drawing tool (developed in conjunction with Disney Research & Pixar) that I wrote about last year, is being acquired by The Foundry. Even better, you can now download it for free. Enjoy!

My only regret is that I failed to get Adobe to acquire this amazing tech & bring it to iPad. Here’s hoping The Foundry provides the great home it deserves.

Animating this miniature world without CGI took 35 people over 5 weeks, plus 85 single-shot takes to get it perfect:

As always, I find the behind-the-scenes story fascinating:

The film was shot through a small camera mounted on the model train in a single, 60-second take. All external movements are mechanical, not animated or done in post-production. All the different transitions that were hand operated had to be incredibly coordinated. It was a well-orchestrated effort to ensure that the 9 people who did several jobs at once were able to either fold things up before, or tilt things over and rotate things to ensure the one perfect take.

vemödalen – n. the frustration of photographing something amazing when thousands of identical photos already exist—the same sunset, the same waterfall, the same curve of a hip, the same closeup of an eye—which can turn a unique subject into something hollow and pulpy and cheap, like a mass-produced piece of furniture you happen to have assembled yourself.

Watching Erik Wernquist’s short & gorgeous space film Wanderers, I’m having so many happy flashbacks to the concept-art books I used to beg my parents to buy at school book fairs.

The locations depicted in the film are digital recreations of actual places in the Solar System, built from real photos and map data where available. Without any apparent story, other than what you may fill in by yourself, the idea of the film is primarily to show a glimpse of the fantastic and beautiful nature that surrounds us on our neighboring worlds – and above all, how it might appear to us if we were there.