The Micronaxx turned me on to this fun (having discovered it via the YouTube Kids app):

The imagination of a kid is immeasurable. Recorded years ago, little Jack tells his incredible story of Iron Man and an out of control Evil Shark eating everything in the ocean. This is apparently what was missing in Iron Man 2.

“…Meanwhile…” shows the world of marine animals like corals and starfish at high magnification and during long time span through the timelapse. The music almost alien and disturbing has been joined to the images that stimulate mental associations to create a contrast, stimulate synesthesia and feelings do not necessarily harmonics and assonant.

Each day I strive to bring you, dear reader, news of the most important, innovative technology developments & most beautiful short-form storytelling possible. And then, some days, I also bring you this.

You know what’s wrong with the sound of all this? Nothing. Can’t wait to see what my old cronies have been cooking up.

Per PetaPixel, the forthcoming update promises to stitch panoramas while keeping the resulting images raw; merge images to HDR; and offer:

“Dad-O, do you want me to dogfood any new apps?” asks six-year-old Finn. Why yes, son, but happily, this one is now out of dogfood & ready to download for Android & iOS.

From the team blog:

Today, we’re introducing the YouTube Kids app, the first Google product built from the ground up with little ones in mind. The app makes it safer and easier for children to find videos on topics they want to explore […]

This is so wonderful.

Alex Powell notes “An awesome suggestion from the YT comments: ‘We need to see a Muppet version of Whiplash, with Animal drumming away while JK Simmons screams at him.﻿”… and have Animal screaming back at him the whole time ;-)”

This is rather beautiful, then:

The “lines on my face” bit is a little on the nose—but literally! so maybe that forgives it. 🙂

I’m reminded of the first Adobe video I ever saw, back in 1993 when I’d just started college & attended the Notre Dame Mac Macs user group. I saw it just that once, 20+ years ago, but the memory is vivid: an unfolding hand with an eye in the palm encircled by the words “Imagine what you can create. Create what you can imagine.” I was instantly hooked.

Who knows who this video might inspire. Here’s to the next 25 years of imaging magic.

Farhad Manjoo writes about how PS “has not just survived but thrived through every major technological transition in its lifetime: the rise of the web, the decline of print publishing, the rise and fall of home printing and the supernova of digital photography.”

The current talk of atomizing & democratizing Photoshop technology reminds me of “Photoshop & Punk Rock,” a Computer Arts guest piece I wrote 6 years ago. As they put it, “Adobe’s John Nack would like to blast Photoshop into a million pieces. He tells us why.”

Let’s measure the development team in the thousands, not in the dozens. Instead of relying on just the comparatively small crew at Adobe, let’s tap into the ‘Photoshop Nation’. And, rather than delivering improvements only every 18 to 24 months, let’s allow everyone to deliver them continuously, on the fly and on demand.

If the arc of my career bends towards one thing, it’s towards removing barriers between people & creative expression, on as large a scale as possible. It’s what I continue to do today.

Power to the people,
J.

“We’ve never been more confused, and it’s all thanks to you!”

Old friends celebrating an old friend, 7pm tomorrow at the Computer History Museum. Hope to see you there!

How did this remarkable tool come to be and what has been its influence on our lives and larger culture? Join us for a remarkable, once-in-a-lifetime opportunity to hear the answers from three key people who made Photoshop what it is today:

Please join us for this special panel discussion on Photoshop, a unique creativity tool that has changed our world and how we see it forever.

Drop your phone into the simple viewer hardware, then move the device to navigate. According to PetaPixel,

The new View-Master will be available in the fall of 2015 for $30 for a viewer and a sample experience reel. Additional experience reels will cost $15 for a pack of 4 themed reels.

The visual fidelity of today’s game engines is off the chain. The main giveaway that what you see is below is synthetic is just the crappily robotic camerawork (left in intentionally to prove the artificiality?):

“If you get caught or misjudge your timing,” says graffiti artist Grisal, “you’re f—-d.” Check out the interview & the work:

Pick an image from your HD to have it composited onto in iPhone, iPad, or Mac screen. Simple & useful.

Google’s Steve Seitz & researchers at the University of Washington have devised a rather cool way to put your photos into context—much like the rephotography projects I posted last month.

Given a reference photograph to be uncropped, our approach selects, reprojects, and composites a subset of Internet imagery into a larger image around the reference using the underlying scene geometry.

What do you think? Is this a capability you’d like to pair with your own travel imagery?

Guillaume Panariello & Thomas Rames took a rather fascinating approach to shooting the video for Unconditional Rebel by Siska:

This is a real video, a slow motion video, a sequence map with a traveling in front of 80 extras placed on 80 meters along a little road, lost in an industrial area. Filmed at 1000 frames/second with a camera (Phantom 4k) from a car driven at 50km/h, the shooting took 5 seconds for a 3’30 video: a living and dreamlike mural.

“5 seconds of camera roll, on the 23rd take, after 11 hours of positioning and choreographing extras, who need to eat …” quips my colleague John Schlag, a longtime VFX industry vet.

British graffiti artist INSA (whom you may remember creating animated building art; see Adobe’s interview with him) has been crafting giant GIF-iti. According to Design Taxi,

To create the massive animated GIF, INSA and a team of 20 people painted a huge mural on the ground in Rio de Janeiro over four days.

They photographed their artwork with a pair of satellites sponsored by Scottish whisky brand, Ballantine’s, to capture four frames that are then used to produce the GIF.

Just cough up the four bucks for this charming iOS app (ostensibly for little kids, but utterly engrossing to my big-kid wife) and thank me later.

My imaging teammates (the guys who brought you World Cup & Halloween face painting) have implemented a fun way to plant a kiss on your sweetie:

Using Google technology consumers simply select their favorite Revlon Ultra HD™ Lipstick Color, upload an image of their Valentine (or themselves), and watch as the perfect kiss – the physical symbol of love – is placed directly on their cheek. The result is a shareable GIF, with a special love note… [U]se the hashtag #LOVEISON when sharing on social media for a chance to be featured on the Revlon Global Love Beacon in Times Square.

Here’s one of the guys behind the curtain, Alex Powell, being congratulated by girlfriend Bridgette:

This clip may not look like much, but it’s got more heart than Episodes 1-3 combined, kid…

When the program leaves beta testing and officially launches, it will be available through the Mac App Store for $50 with no subscription charges and free updates for two years.

You can download a copy in exchange for your email address.

What do you think of it?

The folks behind Prezi have devised a fun-looking new app, Nutshell: “Snap three pictures. Add captions. Choose graphics. And let Nutshell turn it all into a shareable cinematic story.”

I eat this stuff up with a spoon. From Tony Zhou’s excellent Every Frame A Painting series:

One of the many pleasures of Nicolas Winding Refn’s “Drive” (2011) is that the shots feel both tightly composed and weirdly unpredictable. Even though most of the images follow a simple quadrant system, Refn puts plenty of subtle touches within the frame. Let’s take a look.

You might think, as I did, “Okay, fun, but it’s basically a literal translation of the show intro into 8-bit pixel art.” Then the 1:10 or so mark rolls around & things get more bananas.

Directed and animated by Paul Robertson and Ivan Dixon.

“We want to make the complete Paper experience accessible to as many people as possible, and the global success of Pencil is enabling this,” says [founder Georg] Petschnigg. “Pencil’s sales have been fantastic — the walnut version sold out within weeks of launch, and one year later, Pencil remains the top­-selling digital stylus internationally.”

More jaundiced take: No matter how good your creative app is, if it runs on a mobile OS, people just aren’t going to pay for it. They’ll drop 30 bucks on an iPhone case or 40 on an iPad cover, but even $5-10 for beautiful software? That’s “pricey.” (See also people buying $700 telephones every two years but balking at paying even $1/mo. to protect their lifetimes’ worth of photos—this despite the fact that people run out of burning buildings with just their kids & photo albums. So weird.)

I can’t wait to show this to my kids. Per PetaPixel,

Scientific photographer Neil Bromhall… collected the acorn one September, built an underground set for it, and captured one photo every 2 hours with his Nikon D300 and 55mm f/2.8 macro lens.

Check out the site for my friend Dani Beaumont’s wedding, illustrated & coded by Ali Pordeli. The parallax scrolling makes navigation fun while adding to the story (featuring the betrothed chasing one another among Napa attractions).

Check out some hotness from Microsoft Research:

A new Automatic Image Completion feature is similar to Adobe’s Content Aware Fill, except Microsoft’s version is geared toward filling in the missing sections that are often found in stitched panoramas. This creates (albeit artificially) a nice clean look without having to crop your panorama and throw out details.

There’s also a new video-to-panorama feature that lets you take frames from a video and stitch those together to create a motion panoramic image that shows a subject multiple times as they travel through the frame. 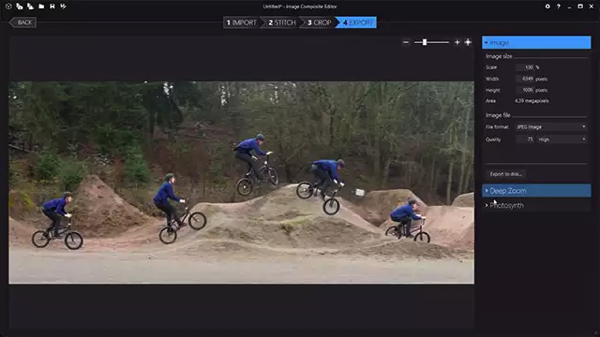 As a childhood admirer of the Omnibot 2000, I find this slightly creepy slice of history fascinating:

Back in the 1980s, David Leventhal ran a small business renting out his robot to perform at parties around Los Angeles. The robot, Casanova, was a crass womanizer and an LA scenester. Today, Casanova is rusting away in Agua Dulce, an isolated town north of Los Angeles.

I’m ecstatic to finally get to say that the crazy-talented guys behind Toontastic & other brilliant, kid-friendly apps are joining Google!

We’re proud to announce that our little toy company is joining a great big team of tinkerers to empower gajillions of playful storytellers around the world. Launchpad Toys is joining Google to create even more amazing creativity tools for kids. Today, we’ve made our digital toys and tools free to creative kids everywhere. Tomorrow… well, we can’t wait to share 🙂

I’ve been a huge fan of these guys for years, and I can’t wait to see what we can do together. Stay tuned!

I really enjoyed this short, gripping peek into the city circa “Escape From New York”:

An original short documentary featuring stories from one of the most dangerous years on record for New York City.

It’s featured on a blog dedicated to that blighted period, created by the makers of A Most Violent Year.

(If you stick around to the end, you won’t actually get to see the seemingly comatose guy start doing the robot. I shouldn’t have promised poor Margot that.)

Once costing $399, the service is now available free of charge. According to TechCrunch, the pro version lets you:

Sign up via this form, then download the free Pro client. (Several commenters noted that they got an error message upon submitting it, but that re-submitting fixed the problem.)